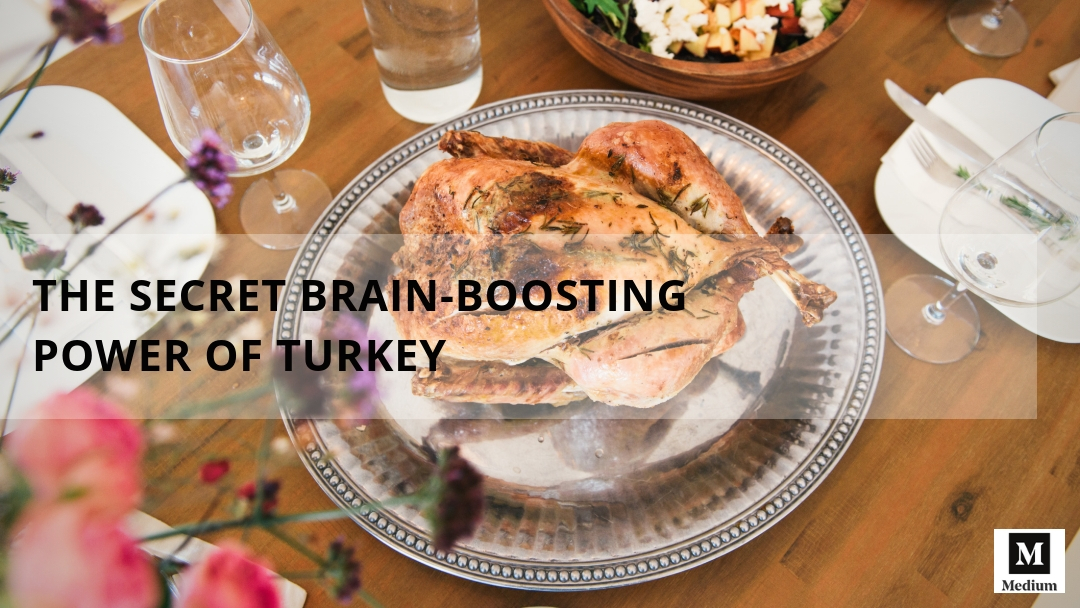 Although the myth that turkey makes you sleepy is long-debunked, it doesn’t mean that turkey doesn’t have an effect on your brain. In fact, as we wrote in our last article,

‘Food’ and ‘drugs’ technically have the same definition. Both are substances that have physiological effects when introduced to the body.

Thanks to Thanksgiving tradition, most of us will find ourselves staring down at a plate of turkey this Thursday.

But before you gobble down this delicious power-protein, remember to give thanks for these 5 brain-boosting compounds you’re about to devour:

While urban legend tells us tryptophan is to blame for the popular post-Thanksgiving-dinner “food-coma,” the real culprit for that is more the combination of mammoth portions of carbs (and alcohol).

It is merely a massive over-simplification of how L-tryptophan really works that has perpetuated this myth. So let’s unpack the information and get to the truth!

L-tryptophan is a precursor for serotonin, a neurotransmitter that in turn produces melatonin, a hormone that helps regulate sleep and your internal clocks. Therefore, in the absence of excessive carbs and alcohol, increasing tryptophan intake can actually improve your overall sleep quality by reducing the time it takes to fall asleep, increasing total sleep time, and promoting a more refreshed waking state (1).

Increased tryptophan intake has also been found to help alleviate depression. This comes from its power to increase serotonin production. (“Precursor” means “a substance from which another is formed.”)

Serotonin is a neurotransmitter that plays a key role in mood balance. One theory suggests that levels of serotonin in the synapse are related to the risk of depression. By increasing tryptophan intake, you can naturally “feed” your serotonin system by providing the raw materials that make it, promoting healthier mood regulation.

Lastly, serotonin is crucial to cognition in general, including verbal reasoning, episodic, and working memory. For this reason, some evidence shows that tryptophan supplementation also “has positive effects on attention and memory” (2).

Selenium is a trace mineral and an important micronutrient for brain function.

The benefits of selenium on the brain include the ability to fight the aging process by reducing free radical damage. Even more powerful when combined with vitamin E, selenium helps defend against the oxidative stress that degrades brain cells, protecting against mutation and disease-causing DNA damage.

And not only does selenium play the defense when it comes to DNA damage, it also plays an offensive role, enhancing the DNA damage repair response (3).

In short, selenium is what we call “neuroprotective.”

Research on tyrosine shows that it may “prove useful in promoting improved performance in situations in which performance is compromised by stress.”

While it’s easy to make a joke about the stress of holiday family-bonding here, what the study was really looking at is that phenomenon we call multi-tasking. In their words, “Tyrosine may sustain working memory when competing requirements to perform other tasks simultaneously degrade performance. (4)”

Tyrosine may also enhance cognitive performance through its relationship with dopamine. Tyrosine is a precursor to dopamine; (it’s necessary for dopamine production.) Dopamine is an important neurotransmitter that helps to move information between neurons. It also plays a key role in regulating movement, attention, learning, and emotional responses.

So, when we have more tyrosine in our brains — such as from eating turkey — the increased availability of it positively modifies the brain’s rate of synthesis and release of dopamine (5). The result? Positively modified cognitive performance.

Turkey ranks as a good source of zinc, a trace mineral essential for normal brain function, especially those functions related to learning and memory.

Zinc plays a critical role in regulating how the cells in the brain communicate. Some research goes so far as to suggest it even “[governs] the formation of memories and controlling the occurrence of epileptic seizures” (6). This idea is further supported by zinc’s involvement in hippocampal neurogenesis; it promotes the growth and development of nervous tissue within the hippocampus, a region of the brain central to learning and forming memory.

Lastly, zinc also has general neuroprotective effects similar to those mentioned with selenium. It protects nerve cells against damage, degeneration, and functional impairment. (7).

Choline is an essential nutrient for optimal brain function because it is the precursor to the neurotransmitter acetylcholine.

Granted, the 220 to 320 milligrams of choline in a 3 ounce serving of turkey are not statistically equivalent of the pharmacologic doses administered within these studies.

The important thing is simply to remember: What you eat changes your brain.

When it comes to getting your peak brain, we say skip the second helping of carbs but go ahead and bring on the turkey!